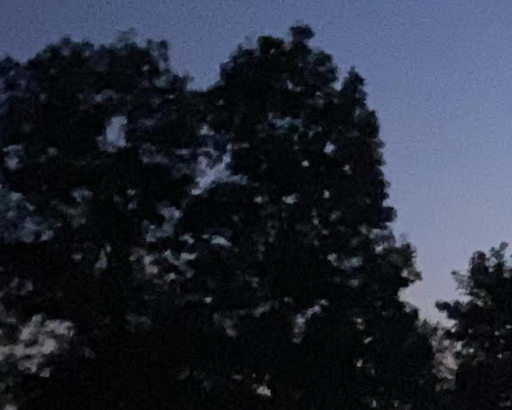 Sparky shuffled down the path he’d traveled so many times before. It was a heavily shaded winding trail that he often chose because the trees were very tall and he liked that. There were also places where the sun shined through that were nice and warm. He would stop there usually and have a snack or even his whole lunch. He always packed in a little extra food for this nice long hike.

He shuffled carefully down the path through the dark parts of the forest and then through to the light parts. He wasn’t hungry yet so he didn’t stop at the light sunny parts. He got to another dark part of the forest where the trees were very thick and heavy and suddenly he saw something he’d never seen before. It was a small light floating in the air. It was about the size of a candle flame and it even flickered like one.

Of course he stopped. It wasn’t exactly in his path but it was close enough to him so that it seemed like it was almost being…well…friendly he thought, and so without thinking he found himself softly saying, “Hello.” The candle flame, as he thought of it now, nodded and remained where it was.

With such an extraordinary event Sparky wondered how far this could go and so softly said, “Could you talk to me, I mean in my language?” Suddenly a loud friendly voice erupted from Candle Flame,“Hello!” Sparky stepped back a little bit and Candle Flame quickly said, “Oh, I’m sorry. I didn’t mean to speak so loudly.” Thus was started their unusual friendship.

Sparky sat down on a log just to the side of the trail. He decided maybe this would be a good place to rest. Having a polite nature he quickly invited Candle Flame to rest near him.

Sparky loved unusual and different people, places and things so his meeting with Candle Flame was a happy moment. He was excited to see how far they could go in what he hoped could be like meeting someone from another world.

Sparky said, “I haven’t noticed you here before.” Candle Flame said, “I felt like there was something or someone that needed me. Do you know who?”

Sparky said, “No, I wasn’t thinking that I needed a candle flame at this time but it is nice. You are providing a nice glowing light that isn’t usually here and I like that.”

Candle Flame formed a smile with a slight chuckle and said, “My feeling is similar. I feel that it was a nice thing for you but I feel this glowing light is needed in some other way. This is what I think”, Candle Flame said, “I believe that in your world there are a lot of people and places and a lot of variety. There are other beings - trees of course but also beings you call animals that in other places would just be considered other forms of people.”

Candle Flame stopped for a moment and Sparky thought about it. He said, “I’ve always thought of animals as other forms of people so that makes sense to me.”

Candle Flame went on, “I feel that if called upon I could help to illuminate the darker corners where people don’t see things as they are as compared to what impressions they might have because they can’t see into those places just like if you look off to the sides you can’t see what’s going on in the forest but there’s lots of things, lots of other beings and life is happening in a big way. You just can’t see it.”

Sparky pondered that for a moment and said, “I never thought about it that way but that makes sense.”

Candle Flame continued, “I feel I have a mission here but I don’t see how I can accomplish it. Can you help?” Sparky considered that and then said, “What do you feel is your mission? ”

Candle Flame answered, “I feel that there are places in peoples hearts that need to be illuminated so they can also see with their hearts and feel what is happening in their lives even when they cannot see all they need to see with their eyes.”

Sparky thought about that for a moment, “Do you mean like noticing things with instinct? I use my instinct a lot when I’m hiking. I pay attention to my feelings because sometimes a trail just isn’t right for me so I take another one.”

Candle Flame formed a gentle smile and went on, “I feel that these times here on Earth need to have yes, instinct, you’re right but also there needs to be love. I know you cannot love every individual but you can have an overview with instinct and love. I feel that there may be people here who know how to do this and there are also people here, called animals, who know how to do this.” Candle Flame paused for a moment.

“Oh yes,” Sparky said, “…my dog absolutely knows how to do that. If I’ve had a hard day my dog can cheer me up just by being herself and jumping around being playful. She’ll want me to go outside and play with her and pretty soon I’m happy. My cat is like that too. She’ll look at me and slowly wink and that always makes me smile. Of course it’s the same when Mom and Dad hug me. And also when my girlfriend gives me a hug. That feels especially good.” Sparky smiled at that thought.

Candle Flame formed a smile in the air and chuckled slightly, “So you do understand. That’s what it takes and I think that I’m going to travel around and try to inspire people with your message as well as my own. If you don’t mind I’m going to use some of your words. Can I quote you?”

It was Sparky’s turn to chuckle then. He laughed and said, “Absolutely, go ahead.”

Candle Flame said, “You might see me sometime in the sky as a moving light. Sometimes I’ll go quickly or you might see me just around the corner as a flash of light or you might just see me in a dream. If you do, I’ll be there to inspire you with what we talked about today.”

“I’d like that”, said Sparky. “And I like it too,” Candle Flame added. They both smiled together in a moment of happiness.

May you all have many happy smiles, a happy holiday time and a most benevolent New Year. Goodlife

Posted by Robert Shapiro at 1:14 PM

Email ThisBlogThis!Share to TwitterShare to FacebookShare to Pinterest
Labels: Hiking